A trip back on memory lane with trains running between Dereham and Wymondham, grab a spam sandwich and look out for air-raids as you are transported back to days gone by.

or to book in

Located in the heart of Norfolk and close to the centre of Dereham, for a detailed map, then click here , we also have displays at Yaxham and Hardingham stations although these are only accesable via the railway. Wymondham station also has displays and events throughout the weekend.

Displays and events are taking place at 4 Stations along the line throughout the weekend.

5pm: The event closes at all the stations.

Dereham - Our main station will be transported back the 40s with displays of equipment, Vehicles and characters from the Period.

At 1130hrs there will be a firepower demonstration of Allied weapons at Dereham.

At 1400hrs we have a flypast of a Spitfire from the BBMF, this is dedecated to our dear friend Barry Beck who recently passed away.

Visit the station museum and lots of displays from the 1940s

The Home Guard platoon will be around causing Chaos and mayhem as usual.

Yaxham - (1940) is transformed into a station under the control of the British Expeditionary Force near Dunkirk, they are holding the line against the advancing Germans and are constantly under fire. Unfortunately the Light Railway is closed this year, but do take time to have a look round, then back on the train to continue your journey.

Hardingham - is under German occupation, alight here to have a look at the displays and learn about the Axis forces, food and drinks are available so take your time. after that you can catch the next train to continue your journey.

Wymondham Abbey field - is next to the station and has many displays and stalls to have a look at while you wait for your return train.

There is a small charge to enter the field, unless you have already bought a platform or train ticket.

Vehicles and reenactors bring the period to life, watch out for unexploded bombs !

Elmtree brewery have provided a beer tent and will be serving their award winning beers over the weekend, as well as soft drinks and water, plenty of stalls of vintage bits and pieces.

There will be music and Dancing from our Resident DJ - AV8 as well as the Knightingales singers.

1515hrs : The battle at Dereham station (please note there will be loud bangs and explosions during this demonstration. ) 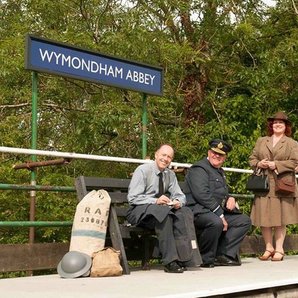 Some great displays can be found at our stations with living history specialist and re-enactors. 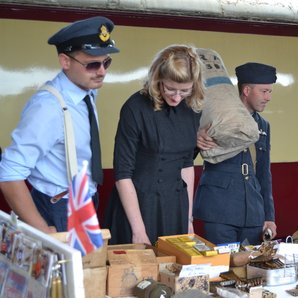 Stalls can be found at Dereham and Wymondham stations, a wide range of collectables, treasures, militaria and fashions. 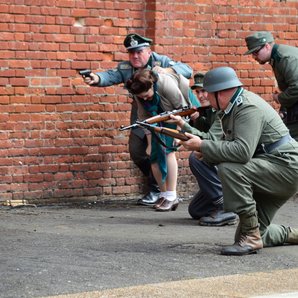 1515hrs: Our main re-enactment takes place on the platform at Dereham station.

Throughout the day there will also be small skirmishes and displays at our stations.

Contact us if you would like to take part in the event by supplying a display or joining the organising committee.

Information on whats going on during the weekend.

Find out details on tickets and timetables here.

A huge "Thank you" to all or supporters for helping to organise the event for the Mid Norfolk Railway.