With lots to see and do during the weekend, this page has all the details of all the events to help you plan your weekend.

The event is now open at our Dereham and Wymondham Stations.

We have vehicles and stalls at Dereham and Wymondham, with food and drinks available at the main stations.

Displays are at Yaxham and Hardingham stations too, so do take your time to enjoy.

There will be groups of reenactors with displays based at our stations.

Lots of historical characters will be present, please do ask them questions and find out about life during the war.

Featuring AV 8  and the Nightingales

This year we will be riviving our 1940s dance and entertainment in the Memorial Hall at Dereham.

Tickets will be on sale from the mid norfolk railway website,

so prepare yourself for a great eveningto compliment the weekend .

This takes place at Dereham station each day, and is one of the highlights of the weekend, (do be aware that there are large bangs and explosions during this event.)

Family at War Re enactment Group

Family at War are an interactive re enactment group portraying life on the
home front during the Second World War. This comprises the many roles of
both men and women who were left at home. For men too old to serve in the
armed forces or those in reserved occupations they contributed to the war
effort by joining services such as the home guard or taking on secret roles
such radio interception - listening to morse code messages and sending them on to Bletchley park.

Women meanwhile kept the home fires burning, raised the children, and took
on numerous roles to keep the nation running - leading to them being dubbed
domestic soldiers. This included volunteering for the WVS, Red Cross, and
completing war work as part of the Women's Institute. In reality civilians were working 24/7, as these roles were carried out after finishing work and whilst
trying to avoid bombs. You were never off duty!

Our displays give a feel for what this multitude of change and increase in
work would have been like in everyday homes. Using a combination of
original artefacts and replica items, we can explain the impact the war was
having on daily life. This is enhanced as we give you the opportunity to taste
a piece of history with our food and drink samples made from recipes of the
time, and witness a cooking demonstration using Ministry of Food guideline

At Wymondham we have lots of displays in the field, including front line, home front and Military Vehicles.

Watchout for the Norfolk Regiment living history group, and also a unique display on the police service during the war.

Elmtree beers are providing a beer tent and there will be dancing and music throughout the weekend.

Food and trade stalls will be at Wymondham for you to enjoy.

Rover tickets - valid all day on all trains

Family (up to 2 adults 3 children)

Concession (Over 60s or Disabled)

Members of the Mid-Norfolk Railway

Platform tickets - not valid for travel 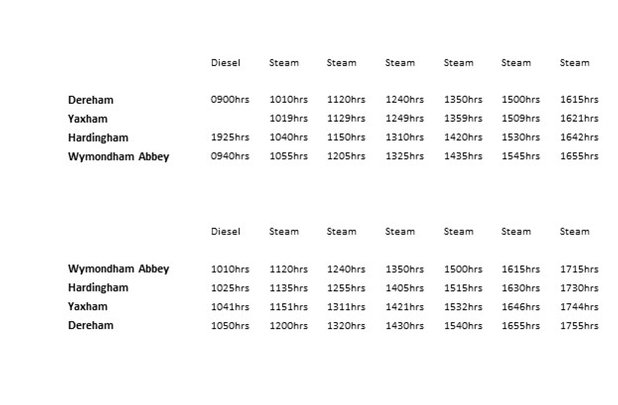 A Weekend back in time.

We hope you enjoy the weekend, please do follow us on our facebook page (Mid Norfolk Railway - Railway at war 1940s weekend).